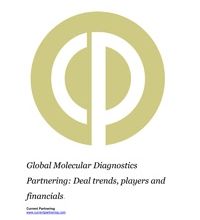 The Global Molecular Diagnostics Partnering 2014-2019 report provides a detailed understanding and analysis of how and why companies enter molecular diagnostics partnering deals. These deals tend to be multicomponent, starting with collaborative R&D, and commercialization of outcomes.

This report provides details of the latest Molecular Diagnostics agreements announced in the life sciences since 2014.

One of the key highlights of the report is that over 650 online deal records of actual Molecular Diagnostics deals, as disclosed by the deal parties, are included towards the end of the report in a directory format – by company A-Z, stage of development, deal type, therapy focus, and technology type - that is easy to reference. Each deal record in the report links via Weblink to an online version of the deal.

In addition, where available, records include contract documents as submitted to the Securities Exchange Commission by companies and their partners. Whilst many companies will be seeking details of the payment clauses, the devil is in the detail in terms of how payments are triggered – contract documents provide this insight where press releases and databases do not.

Chapter 3 provides a review of the leading Molecular Diagnostics deals since 2014. Deals are listed by headline value. Where the deal has an agreement contract published at the SEC a link provides online access to the contract.

Chapter 5 provides a comprehensive and detailed review of Molecular Diagnostics partnering deals signed and announced since Jan 2014, where a contract document is available in the public domain. Each deal title links via Weblink to an online version of the deal record and contract document, providing easy access to each contract document on demand.

Chapter 6 provides a comprehensive and detailed review of Molecular Diagnostics partnering deals signed and announced since Jan 2014. The chapter is organized by specific Molecular Diagnostics technology type. Each deal title links via Weblink to an online version of the deal record and where available, the contract document, providing easy access to each deal on demand.

A comprehensive series of appendices is provided organized by Molecular Diagnostics partnering company A-Z, stage of development, deal type, and therapy focus. Each deal title links via Weblink to an online version of the deal record and where available, the contract document, providing easy access to each deal on demand.

The report also includes numerous tables and figures that illustrate the trends and activities in Molecular Diagnostics partnering and dealmaking since 2014.

In conclusion, this report provides everything a prospective dealmaker needs to know about partnering in the research, development and commercialization of Molecular Diagnostics technologies and products.

2.2. Molecular Diagnostics partnering over the years

A full explanation of license type definitions can be found here.

We guarantee our prices are competitive. If you find the same report advertised at a lower price within 7 days of purchase, we will refund the difference.

We guarantee that the report will be sent within the specified delivery times. In the unlikely case of a delay we may offer a partial refund as compensation. (Terms may apply)

If an update is published within 30 days of your purchase, you will receive it absolutely free of charge.

We take your data and security seriously. See our privacy policy for details of how we manage your data.

All card payments are processed by SagePay.

If you have any questions about your report or are unhappy with the quality, we will do our best to resolve your query. Contact us direct.

Current Partnering is part of Wildwood Ventures Ltd., based in York, United Kingdom. We have been trading successfully online since 2009 and work with some of the most famous brands in the business. We carefully select our partners to ensure that the publications meet expectations of demanding customers.